Councillor’s house set on fire as she sleeps with family

A Buffalo City Metro councillor’s house was torched as she slept soon after 3am on Thursday.

Zameka Kodwa-Gajula, who is a ward 24 councillor, said she was fast asleep when people poured petrol around her Unit P House in Mdantsane and torched it.

She was woken by the smoke and heard the windows being broken. 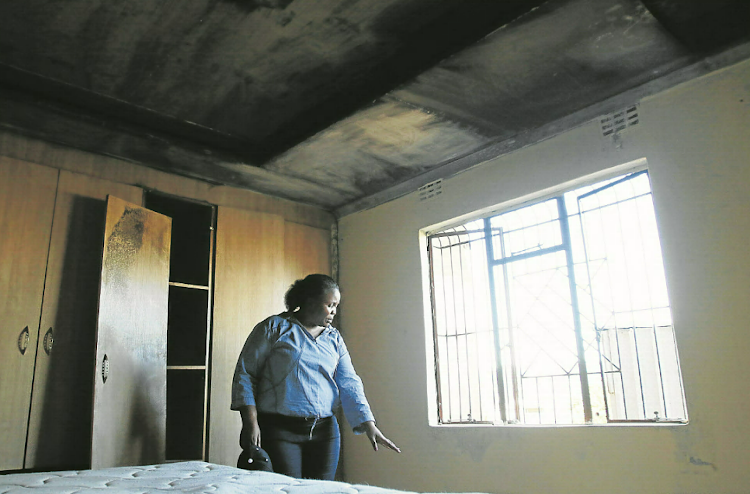 All her furniture is reduced to ashes, and she said it was only “thanks to God” that no one was injured.

Her daughter and cousin, both in their 20s, were sleeping in the opposite bedroom during the attack.

BCM spokesman Samkelo Ngwenya confirmed the incident, saying: “We have received reports of the arson on councillor Gajula’s house.

“It’s very disturbing and disappointing indeed that in this day and age in our democracy, we are still facing elements of this nature.

“More so because the torching occurred while one is supposed to be safely sleeping in the comfort of their home.”

It is the fourth time that her detractors have attempted to torch her home. Between May and July, there were three similar attempts.

“But this time around they wanted to kill me as there was petrol all over my yard when I was woken up by smoke and windows breaking from the heat of the fire just after 3am,” she said.

Kodwa-Gajula, who has served two terms as an ANC councillor in charge of Ikhwezi Village and the adjacent Unit P, is being accused by her critics of not working to bring roads, water and housing to the area.

At the centre of the dispute is a new housing project, which some desperate Unit P residents claim they qualify to benefit from but have been excluded.

The first dramatic scenes played out in May when angry protestors blockaded the R346 between Potsdam and Berlin with burning tyres, causing traffic congestion.

This resulted in the arrest of a 23-year-old man who allegedly threw stones at Kodwa-Gajula’s house, breaking her windows.

Kodwa-Gajula’s house has been under the watchful eye of BCM law enforcement agents for a while.

Unit P resident Thulela Zantsi said some community members were angry that they were not part of the housing list.

“I was not part of the protest, but I understand their anger.

“But it is wrong to put someone else’s life at risk like this.

“There is no need to use violence,” said Zantsi.

“My family was nearly wiped out this time around because there was petrol all over the yard.

“To top it all, the taps were switched off, and so we had to use buckets to douse the fire, which was spreading very fast.

“I don’t know where we will sleep tonight.

Ngwenya said: “We are convinced that this matter is more than just service delivery driven because we have been to the area on numerous occasions.

“In the last engagement, we met sections of the community with the BCM delegation led by the mayor [Xola Pakati] and we responded to all the issues raised and set plans on some of those that still have to be done.”

He also called for calm, saying communication channels with powers-that-be at the City Hall remained open. “Our doors are open to engage with any sectors of the community that wish to raise issues in the area and we urge the community to follow those channels.”

← Newer Post
“ANC must step Aside Gracefully if they ever lose in 2019, must allow proper investigations into ANC corruption”, Malema Blasts Ramphosa.
Older Post →
Must Read : Whites should understand that Land is about dignity and identity, a connection to forebears.