Wow ! Malema are you involved in farm murders? response: ‘Maybe, maybe not’.

Julius Malema, the attention craving cry baby of SA politics, grabbed at another opportunity to cause controversy when he responded to a question on Twitter asking whether he was behind farm murders in South Africa.

The question followed the publication of a new book by Ernst Roets in which the author argues that Malema’s singing of the struggle song: “Kill the Boer” caused an increase in farm murders. This coincided with the release of a voice clip recorded for a Carte Blanche programme on farm murders in which Malema allegedly talks to a leader of the notorious “28 Gang” in prison promising him support to carry out farm murders

To the question, Malema responded: “Maybe, maybe not.”

A very transparent political response, Julius. On the one hand you will be applauded by the murdering, hate driven, barbaric mob calling for a white genocide. On the other hand you might just scare the white man into capitulating and handing over his land on a silver platter.

The problem is, Julius overestimates himself. That happens when a not too intelligent individual sees his name on TV too often. The fact of the matter is, out of 22 388 082 registered voters in 2014, only 1 169 259 supported the EFF. That is 1/10th of the ANC’s support base and less than 1/3rd of the DA.

The media makes Julius and his party into a major political force. They are not. 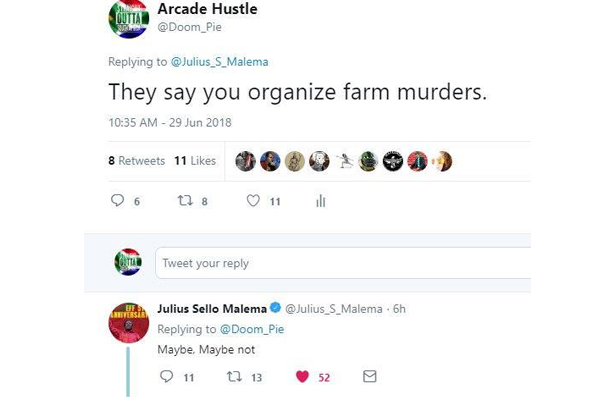 3 thoughts on “Wow ! Malema are you involved in farm murders? response: ‘Maybe, maybe not’.”

← Newer Post
Malema – The day i questioned WHY “minorities are being appointed into economic cluster to the exclusion of black Africans” i was declared an enemy, Grodhan is the real president of South Africa
Older Post →
Just In ! Ramaphosa’s Lies On Petrol Price Hikes. A Must read !