While the world yesterday celebrated the centenary of Nelson Mandela – a man who believed in equal education for all – parents kept their children home from the “death trap” of Schornville Primary.

After 14 years of broken promises, the school is tottering on its pillars. Ceilings have collapsed and electrical wiring is exposed.

Parents of the 1200 pupils from Grade R to Grade 7 have “condemned” the 50-year-old building in King William’s Town, saying it is an accident waiting to happen and a “death trap”.

Prefab classrooms perching on cement blocks, some of them toppling over, made news in April last year when a pupil fell through the floor.

Leon Weimers, a parent who lives nearby, said the wall of a classroom block collapsed during the midyear holidays.

On Tuesday, when schools reopened for the third term, the pupils spent only two hours in class before 100 parents, led by School Governing Body (SGB) members, emerged from a meeting that decided to shut the school and send the children home. 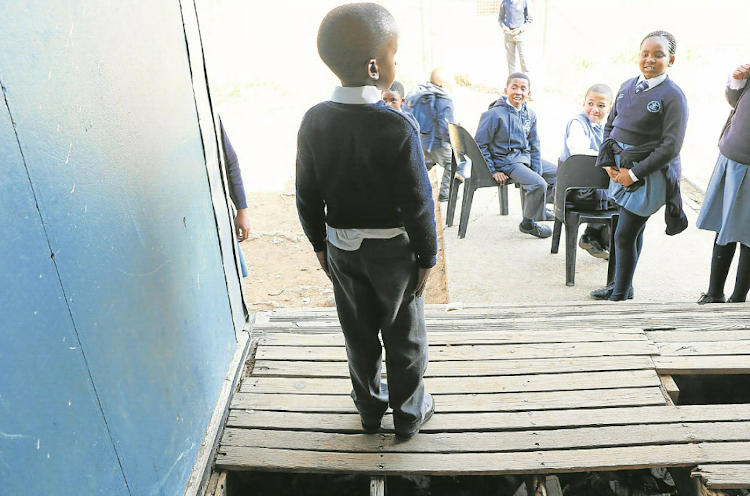 “It was unfortunate that the parents opted to disrupt the learning and teaching of their own children,” he added.

When the Dispatch arrived on Tuesday around midmorning, parents were seen cautioning pupils to stay away. “This school might collapse at any time. We do not want any of you to get hurt,” said one parent.

SGB chairman Mzwandile Vaaiboom told the Dispatch: “Instead of engaging in a typical protest of burning and destroying, we decided this was a better and safer form of action.

“This school is beyond repair and we have condemned the building. If the department think they will come here and just repair classrooms or give us more prefabs they are wasting their time. We do not want a quick fix. We need a new school. We will return the kids once the contractor is on site.”

Pulumani said: “Closing the school does more harm than good. As indicated last year, the school will benefit from temporary structures to remedy the situation as it pertains now. That commitment still stands.”

Asked when the department planned to build a new school, Pulumani was unable to answer as he could not reach the department’s head of infrastructure, Tsepo Pefole.

According to Vaaiboom, the department had been promising a new school for 14 years.

The collapsed classroom was cordoned off with red-and-white barricade tape. Almost the entire floor was caved in.

Parent Nomawethu Cutu, who has two children at the school, said she would rather have her children at home than to get a tragic call from school.

“Maybe the department is waiting for a child to die before they do something. Well, we parents are not going to wait for that to happen. We love our children and now we know the department does not.”

In a memorandum to education MEC Mandla Makupula, parents demand he start laying the first brick within a month. Failing that, the SGB says, there is no option but court.